If you’re a football player, chances are you watch as much football as you can – whether it’s on TV, online, or at a live game. Watching football, especially at a high level, is a fantastic tool to learn the game. It can help to understand positioning, inspire new moves, and amp up your passion for the game. However, it has does not build concrete skills that contribute to on-field performance.

But what if there was a way to actually improve your football intelligence skills during your time off the pitch?

The Football IntelliGym has been shown through scientific studies to improve football sense, and today, we discuss a study out of the Netherlands, a region known for their elite football youth development programs.

The IntelliGym uses a video-game-like interface to train the cognitive skills that relate to football players’ performance. These skills include anticipation, divided attention, working memory, peripheral awareness, and spatial perception. Other important abilities the IntelliGym boosts are focus and concentration, team play, rapid adaptation to a dynamic environment, the ability to spot evolving opportunities, pattern recognition, execution of game plan, and coping with time constraints. As you can see, there is a multitude of cognitive skills that build up what is called football intelligence, and these skills can be strengthened through cognitive training.

Now, we know it’s tough to believe that training on a computer can actually improve performance on the field – so it only makes sense that this claim is verified by scientific studies. Below, we’ll discuss a study out of Vrjie Universiteit Amsterdam, a leading research institute in the Netherlands, that looked to measure performance improvements at two elite football academies, AZ Alkmaar and PSV Eindhoven, who put the Football IntelliGym to the test.

The study, Football IntelliGym Efficacy Analysis, looked at how cognitive training with the Football IntelliGym works to develop a players’ on-field ability and compared it to watching football videos. This study included players from two elite football academies, PSV Eindhoven and AZ Alkmaar, both playing in the top league in the Netherlands and well-known for being “feeder clubs” because of their incredible youth academies.

The study included players from youth teams at each academy, with each academy providing two teams, for 52 total players between the ages of 14 and 17. Players from the teams were randomly divided into two groups. One group was assigned the Football IntelliGym cognitive training program, while the control group was assigned a different computerized task: to observe video clips of real football matches and identify football-related events or actions such as passes, turnovers, headers, fouls, and shots on target by one team in that video. The duration of this task was about the same length as the IntelliGym training session.

The participants were instructed to do their IntelliGym sessions (experimental group) or the Video Challenge task (control group) two sessions a week, 30 minutes each session, for 10 weeks. Both experimental and control groups’ participants were told that their respective activities were aimed at improving their football decision-making performance. Both groups’ activities were closely monitored by the study staff to ensure they were on task.

To test the efficacy of the two training programs, the players played four 4-minute football mini-games in a small space and their skills were rated both before and after the ten-week training period. The players were video-recorded from above and the footage was later analyzed by trained university staff members. The staff evaluating did not know if the players were part of the IntelliGym group or the control group, and did not know if the footage was from before or after the 10-week study. The assessment was done using a skill-assessment program called the  “Notation Analysis System,” which evaluates players on basic elements: attack with the ball, attack without the ball, transitions, positioning, and defense. The players’ actions are reviewed and analyzed one at a time, and when a player carries out a predefined action, the respective score (as defined in a scoring system) is awarded.

After analysis of the footage, the results were clear: the study showed that the IntelliGym-trained group showed significant performance improvement over the control group. 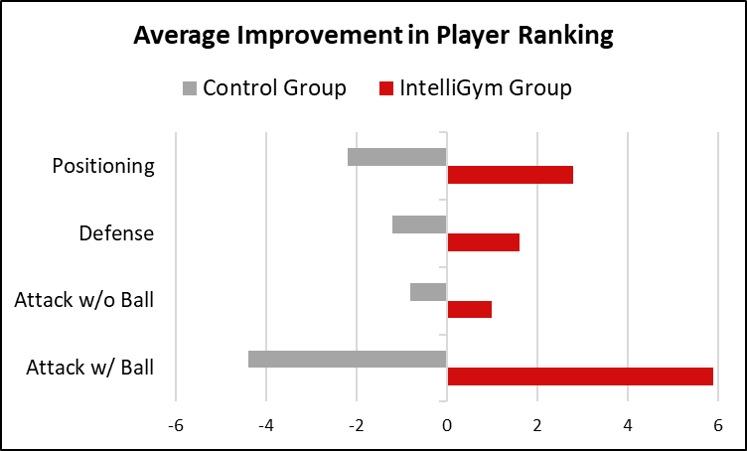 It’s important to note that both groups improved, but the overall on-field performance of the IntelliGym group was 27 percent higher than the improvement of the group who only watched video clips. 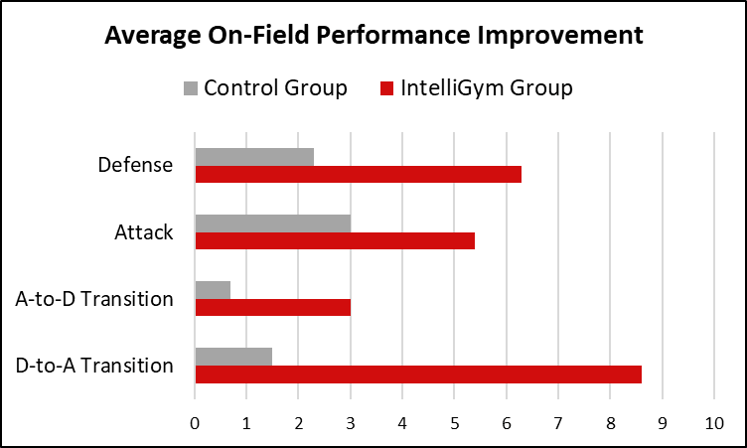 The results from this study point to cognitive training as a powerful tool in improving on-field performance. It showed that while watching football games can improve football skills, a cognitive program like the IntelliGym is more effective. For players who want to maximize their football ability, putting in time with the IntelliGym is the best way to improve.

Are you ready to improve performance this season for your athlete or team? Sign up for the Football IntelliGym and add cognitive training to your routine today!

The study was conducted by researcher Geert J. P. Savelsbergh at the Vrjie Universiteit Amsterdam. Savelsbergh is a professor in the Faculty of Behavioural and Movement Sciences, Motor Learning, and Performance. He is also the head of the Motor Control group at MOVE and the Desmond Tutu chair for Youth, Sport and Reconciliation. He has published over 200 papers in internationally-renowned scientific journals, with his main area of focus being the visual regulation of movement, talent development, and identification. In other words, his research focuses a lot on athletes and athletic training. The study was the first of its kind, measuring transfer of skills from a training environment to on-field football performance.